Gold mining is an important theme in the history of the upper Yukon River region in Alaska and Canada. One of several mining camps in the area, the Gold Placers Incorporated camp contains many important cultural and historical resources, including the camp buildings, the gold dredge, tailings piles, earth-moving equipment, a historic roadhouse, and assorted artifacts. The camp buildings have been fully restored, and they represent perhaps the best preserved gold mining camp in Alaska.

The camp covers the lower 8 miles of Coal Creek valley before the creek empties into the Yukon River. The camp is comprised of frame buildings, a gold dredge, tailings piles, and mining debris that represent Alaskan dredge mining operations of the 1930s and beyond. Most of the buildings were constructed on log skids so Caterpillar-style tractors could tow them to new locations as workers followed the path of the dredge. The bunkhouses, mess hall, shop, and other buildings have been moved at least three times (arriving at their present location in 1952). The design, materials, and construction of the buildings all reflect the utilitarian and remote nature of the camp. The workmanship is strictly functional—competent but uninspired.

The gold dredge is a medium-sized floating gold-processing plant with 4-cubic-feet buckets powered by a diesel generator. The main body is 41′ wide and over 80′ long, with the additional length made up of the adjustable bucket line and the tail sluice assemblies. The dredge moved throughout the creek valley, leaving behind orderly piles of tailings, or waste rock. When in operation, the dredge floated on large steel pontoons in a pond of its own making. Today it rests on the bottom of that pond approximately 1.25 miles from the mouth of Coal Creek. The dredge is the only one in the national park system; however, a very similar dredge, owned and operated by the same investor, lies roughly 5 miles to the west in Woodchopper Creek (it is not on property owned or managed by the National Park Service).

Slaven’s Roadhouse is located near the mouth of Coal Creek and serves as a popular stop for Yukon River travelers. The roadhouse was built between 1934 and 1935. It is a 37′ x 21′ two story building. The section closest to the Yukon River is constructed of logs while the rear section was built of milled lumber mostly salvaged from the Ft. Egbert at Eagle (roughly 80 miles up the Yukon River from Coal Creek). The establishment briefly offered food and lodging for summer and winter river travelers in the mid-1930s before it was purchased by Gold Placers, Inc. to support company operations. Today the building serves as a public-use cabin.

In 1897 prospectors on their way to the Klondike gold fields gave Coal Creek its name when they discovered deposits of coal several miles upstream. The gold-seekers were interested in coal because it could be sold as fuel to paddlewheel steamboats, but they were soon distracted by signs of gold in the gravels of the streambed. According to an 1898 article in the New York Times, “The surface dirt [at Coal Creek] pays from 30 to 90 cents per pan, and sluices can be emptied directly into the Yukon. Prospectors are greatly encouraged by the strikes.” This was not a major gold strike, but it was a start. 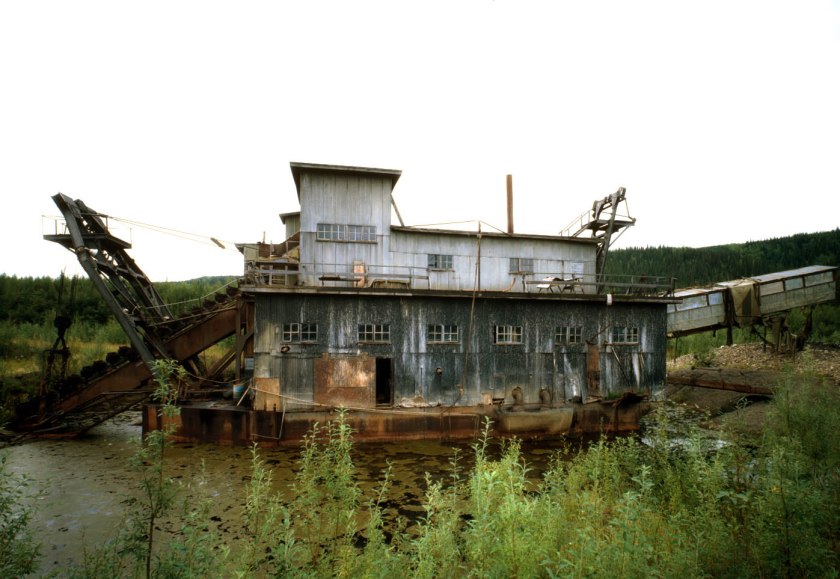 The men and women who arrived in those early days began small-scale placer mining along Coal Creek. Using picks, shovels, and long sluice boxes that they built on site, the miners began the backbreaking process of separating gold from creek gravel. By 1901 mining claims lined both sides of the creek from its mouth to at least 10 miles upstream, and a handful of miners built log cabins and stayed on their claims during the winter. Others worked their claims only in the summer and spent winters in Circle, Eagle, or Fairbanks. For the next three decades, a small but determined cadre of miners built ditches to divert water to their sluice boxes and cut trees for firewood to feed the small steam boilers used to thaw the permanently frozen ground known as permafrost. Trees were also cut for building material. A similar process occurred in the neighboring Woodchopper Creek valley, and over time, both drainages were largely deforested at lower elevations. Miners used ditches and dams to run water through their sluice boxes and to uncover gold-bearing gravels, and the creek often ran brown with sediment dislodged by their activity. At Coal Creek, miners often processed up to 80 cubic yards of gravel to obtain a single ounce of gold. At this rate, miners were compelled to augment their income by trapping, woodcutting, and other odd jobs.

Dramatic change came to Coal Creek in 1935 when Alexander McRae, a Canadian millionaire and mining investor, decided to buy out the old-timers’ claims and import an enormous gold dredge capable of overturning the earth to extract millions of dollars in gold. To facilitate mining on an industrial scale at Coal Creek, McRae’s company—Gold Placers, Inc.—built an 8-mile road from the Yukon River to the upper creek valley, a camp to feed and house the dredge crew, and a system of pipes and water diversions to harness the incredible power of water under pressure.

Once this infrastructure was in place and the dredge was built, the Coal Creek watershed would never be the same. The practice of placer mining by machine is a multi-step process that involves stripping the land of trees and topsoil, thawing the permanently frozen ground below, and excavating enormous amounts of gravel with the dredge as it eats its way across the landscape. Water is essential to placer mining, and at Coal Creek the employees of Gold Placers, Inc. used water cannons to blast away topsoil and to speed the thawing of the permafrost. They diverted water to create lakes in which the dredge floated on its steel pontoons. And they washed “a world turned upside down.”

As the gold dredge moved up and down the Coal Creek drainage it excavated 20′ into the earth and scooped thousands of tons of gravel into its gravel-washing interior. Whereas a single miner using hand-tools might wash 1 cubic yard of gravel in a day, the dredge processed 3,000 cubic yards in a twenty-four-hour period. Water jets, revolving tumblers, and multiple sluice boxes separated gold from the waste material, which poured out of the back to create arc-shaped mounds of discarded rock called tailings. The dredge operated nearly continuously for the next twenty years, meandering wherever the richest concentrations of subterranean gold could be found. In the process, the channel of Coal Creek was repeatedly altered, and most of the valley floor was scooped up, processed for gold, and re-deposited, ultimately producing around $3 million (roughly $120 million today)in precious metals. After major operations under Gold Placers, Inc. ended in 1957, individuals leased the dredge and mining claims, mining periodically in the 1970s and 1980s. Today the dredge’s tailings—tell-tale signs of industrial placer mining—cover roughly 8 miles of the Coal Creek valley.