Just like in any other type of gold mining activity, the key to doing well is in digging sample holes to first find a high-grade-gold deposit. 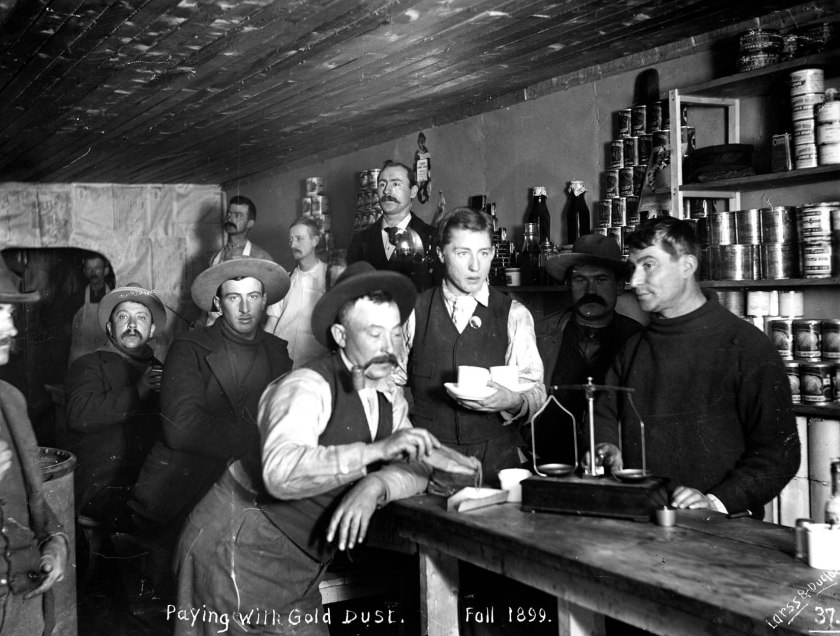 As the old timers started mining in the creek or river, they moved uphill, allowing gravity to carry the water and tailings back down towards the creek or river. As the old-timers worked further up into the banks, often the gravel became deeper and more difficult to remove by conventional hand methods. In time, the old-timers developed hydraulic mining.  This is where they directed large volumes of water from nearby (or sometimes distant) creeks under great pressure through monitors (huge pressure nozzles). The high-pressure water was used to wash large volumes of gravel through large sluice boxes placed on the banks of the creeks and rivers. As the sluicing operations cut further up into the banks, the sluice boxes were moved forward, which left tailings deposited on the banks.

It is estimated that as much as 50-percent of the gold washed right through the sluice boxes in hydraulic operations because of the large volume and velocity of water which such operations used. Hydraulic operations did not lose gold in the same amounts all of the time. Much of the gravel that these operations processed contained little or no gold. The concentrations of gold were found along bedrock or at the bottom of lower strata flood layers. So, valueless top-gravels were processed at volume speed, and they would try to slow down when getting into pay-dirt materials. Sometimes, however, they would cut into pay-dirt materials at volume speed–before having a chance to slow down. This is where large volumes of gold would wash directly into the tailing piles. 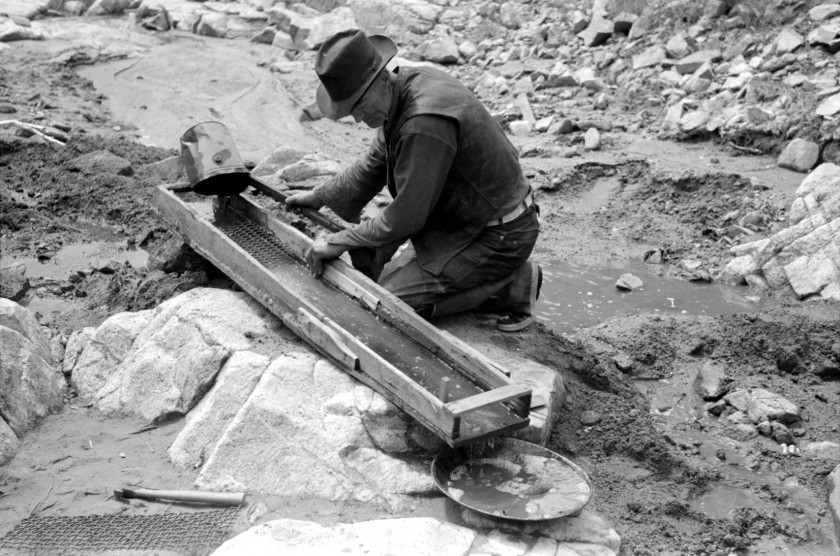 Since the time of large-scale hydraulic mining, there have been many occasions of extreme high water. These floods re-deposited old hydraulic tailings piles into newly-formed streambeds up on the banks and within the active waterways. Places where gold was lost from hydraulic operations formed into new pay-streaks–often only inches or a few feet from the surface. This has created a wonderful and exciting opportunity for modern small-scale gold miners.

Finding pay-streaks with a surface digging project is usually done by setting up the sluice in several different locations, and giving each sample a large enough test hole to obtain an idea of how much gold the gravel is carrying. Sample holes should be taken to bedrock if possible. However, if the gravel goes deep, you have to avoid getting in too far “over your head.” At the point where you start digging deeper than 3 or 4 feet with a pick and shovel, any pay-streak is going to have to be exceptionally rich to make the effort worthwhile. Richer deposits are more scarce; and therefore more difficult to find. So it is important to stay within effective digging/sampling range, and not get yourself into a full-scale production operation before you have found a high-grade gold deposit.

While sampling with a pick and shovel, it is very seldom that you will actually see gold in the gravel as it is being uncovered. Usually, you do not see the gold until it is time to clean up the sluice box after the sample is complete.

If you finish a sample hole and end up with a good showing of gold, the next step is to find out exactly where the gold came from. In other words, did it come off the bedrock, or did it come from a particular layer in the streambed? You must know where the gold is coming from to evaluate the value of the pay-streak. For example, digging two feet into a paying flood layer requires much less time and effort than digging four feet and having to clean rough bedrock. If you do not know for certain where the gold is coming from, and you assume it is coming from the bedrock underneath four feet of hard-packed streambed, you might decide it is not rich enough to work and walk away from a very rich deposit located at the two-foot flood layer. 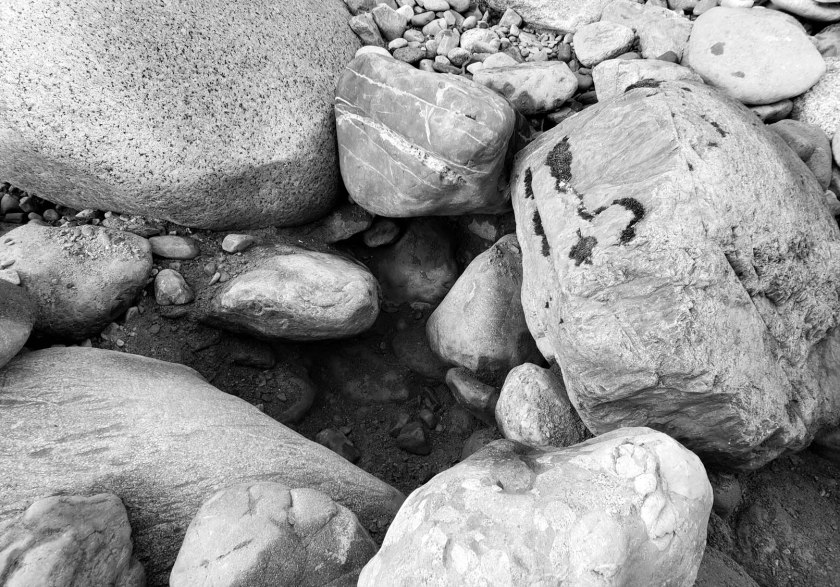 At the same time, if you are able to reach bedrock, you always want to get a good sample there by thoroughly cleaning the surface and any irregularities there. Sometimes that is where the richest deposits are found.

Pinpointing the source of gold is reasonably easy once the sample hole has been opened up. It is likely that the gold will be concentrated either along the bedrock, along the bottom of a flood layer, or at both locations. Sometimes, there is more than one flood layer that carries gold. You can run small production samples of each stratum separately to see which is paying. Or, sometimes you can simply take pan-samples in the different contact zones between the layers.

One question commonly asked about sluicing procedure is the proper slope-setting for a sluice box. A sluice box generally requires about an inch drop per each linear foot of sluice. This is just a guideline. Basically, you need enough water velocity to keep the material active in the sluice behind the riffles, but not so much that you are washing most of the material out from behind the riffles. We like to get enough water flow to keep the larger material moving through and out of the box. If we see lots of rocks building up in the sluice, we know we do not have enough water velocity. An occasional rock that needs to be helped along is alright in a sluice. In surface sluicing, we would rather toss out an occasional rock and have the peace of mind that we are also achieving maximum possible fine gold recovery.

One mistake that beginners often make is in thinking that the recovery system is at fault because they are not recovering very much gold. Most often, however, it is not the recovery system. It is the lack of a good-paying pay-streak! The answer to this is to hustle around with more sampling.  Flood layer pay-streaks are often easier than bedrock pay-streaks to clean up with pick & shovel surface mining operations. There are several reasons for this. One is that a flood layer pay-streak is closer to the surface. This means less gravel to shovel to reach the gold. Another reason is that it takes more effort to clean the gold off of a bedrock surface when you are not using a dredge. You can only do so much with a shovel. They give you the ability to clean bedrock surfaces and cracks with minimum effort. If the gold is coming off bedrock, you must invest the extra effort to clean it off well. Otherwise, you stand the chance of leaving an important portion of the gold behind as you mine forward on the pay-streak. 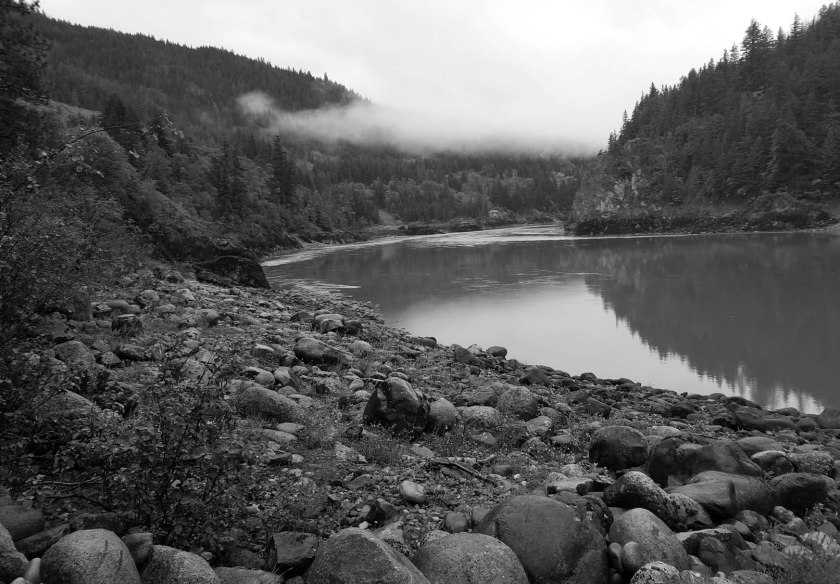 Many pick & shovel miners today also are equipped with an optional suction attachment. To use it, the pressure hose from the water pump is attached to a suction nozzle that directs the water and material through a suction hose into the sluice. So after an initial hole is dug up out of the water, the hole can be filled with water and material can be sucked into the sluice box. The recovery system can be positioned so that the water discharge can run back into the hole– keeping the hole from running out of water.

So you can dig a hole up on the land, and then begin a suction mining operation outside of the active waterway. This is great!

Some surface miners also sample for the gold-path up on the bank by pan sampling the moss. Sometimes, how well the moss is producing gold at the surface can also be an indication of how well the gravel is paying underneath.

When moss, roots, clay and other types of materials are producing good quantities of gold, it is always a good idea to break up the material as much as you can before running it through a sluice box. This is usually done by pulling it apart over the top of a classification screen, or breaking it up inside a bucket of water before running it through the sluice. This slows down production, so the additional work must be rewarded by the recovery of more gold.

Once you find a pay-streak in pick & shovel mining, you want to give some thought to how you are going to develop the deposit with a minimum of wasted effort. For example, you will have to pile the cobbles (rocks too large to pass through your recovery system) and tailings somewhere. Preferably, cobbles and tailings would not be placed upon some other section of the pay-streak. Otherwise they might need to be moved twice, or you might be forced to leave behind high-grade areas that have been further buried. So it is worth some extra sampling to get an idea of the pay-streak’s boundaries. Then you can deposit the tailings material in a location where you will not need to move them again.

Placing tailings is, and always has been, one of the most important aspects of a mining operation–of any size. Yet, it is one of the most neglected aspects of mining by a substantial portion of small-scale miners. This usually comes back to a simple case of gold fever. The miner starts getting a good showing of gold, gets excited, and never slows down to define the boundaries of the deposit. This almost guarantees an important portion of the deposit will end up underneath cobbles.

Pay-streaks up out of the water are often different from those found in the river or creek. What I mean by this is that they do not always follow the same gold path. When you find a pay-streak in the river, you can usually line it up with the next river bend and make a pretty fair guess where the next several pay-streaks are likely to be. This is because river pay-streaks usually form from gold that has washed down the river along its own gold path during major flood storms.

Pay-streaks outside of the river often were formed from gold out of tailings from old hydraulic mining operations. So you can find a small pay-streak up on the bank, follow it until it plays out, and then not find any sign of it further upstream. This is because the source of the gold deposit was not from a point further up river. Then you can find another pay-streak on another path altogether. In other words, pay-streaks up on the bank might not follow a specific single gold path, as they usually do in the river.

Pick & shovel mining is a lot of fun – when you are finding gold. A healthy portion of miners today mine out of the water. The reason for this is that it gives them an opportunity to find pay-streaks in banks and ledges that were previously overlooked, or were deposited from earlier mining. So have fun, and get out there and get some gold!