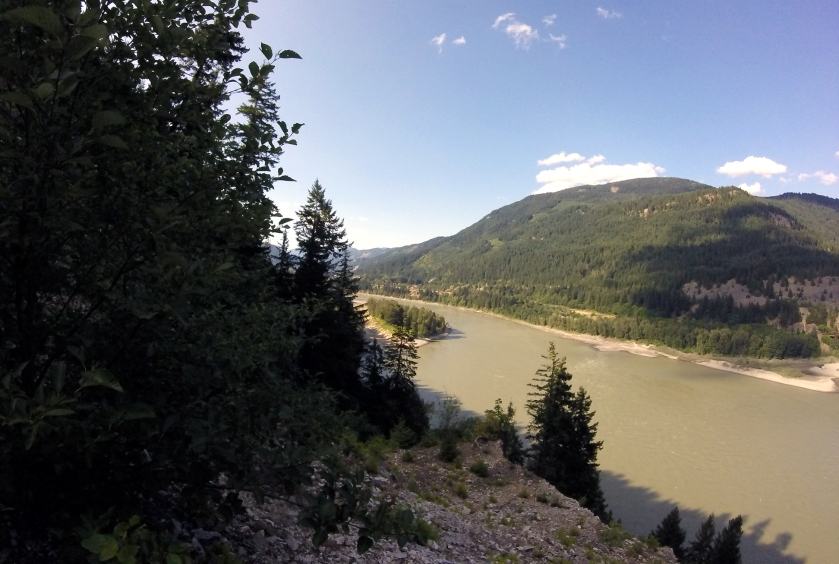 We decided to take one last trip to one of our Fraser River claims. The weather was cold, but the forecast called for sun. The purpose of the trip was twofold. Armed with our AT Gold metal detectors, we wanted to do some late season crevicing. In addition, we wanted to test out CL Haddon’s Backpack High-Banker.

We did manage to find a couple of nice pickers crevicing, but decided to abandon our efforts and move some dirt through the “Mini” high-banker. CL constructed a small burm to hold the water, and recirculate as were a fair distance from the river. Their was some concern as to whether or not the Devon Vortex matting would hold the larger gold in addition to the finer gold.

After running for half an hour, CL shut the unit down and pulled the mat. I was very impressed with how little an amount of cons remained. After panning the cons, it became clear that the sluice ran beyond our expectations. Not only did it catch an amazing amount of micro flour gold, but it also held some nice sized flakes and a small nugget.

The second morning, we continued to run the high-bankers, despite the ice in our pans. The backpack high-banker continued to perform well, and we were all impressed. A tip of the hat to CL for his terrific design. CL hopes to do a few modifications over the winter. What these modifications are, waits to be seen. I guess we’ll find out next season.

Mike and CL check the cons. In addition to checking the cons we also checked the tailings to see if any gold was being blown out. The tailings revealed only a couple of micro-specks. All in all, the weekend was a huge success and we found some nice gold.