The area north of Revelstoke is called the “Big Bend”, it was first discovered in 1864 when the explorers found gold along many of the creeks and rivers in the area. The early mining was done by hand and there are several areas still visible where they worked the gold bearing gravels and dug shafts to extract the gold from the hard rock veins too.

The first reports of minerals discovered in the Big Bend area north of Revelstoke was of placer gold in February 1865. The discovery was originally in Carnes Creek with subsequent richer placers located in French Creek, a northern tributary of the Goldstream River. In 1865 and 1866, gold valued at three million dollars was taken from this area.

In the early 1990’s, Ray Brosseuk, started a small mining operation on French Creek located at the mouth of French Creek close to where it flows into the Goldstream River. Lots of the larger gold nuggets were found with quartz attached to them which led to the staking of the hard rock claims. Several million dollars were spent on the property expanding the placer operation and identifying the hard rock source, the quest to find the hard rock source, consisted of stream sediment samples, Ariel magnetic surveys and seismic work. However, in the mid 1990’s a change took place in the leadership of British Columbia and it became difficult to comply with the new mining regulations.
Mr. Brosseuk chose to shut down the operations at French Creek and focused on his Yukon Properties. The government has now changed back to Pro Mining, making mining possible again. Today several mines have re-opened and new ones are being developed in the area. 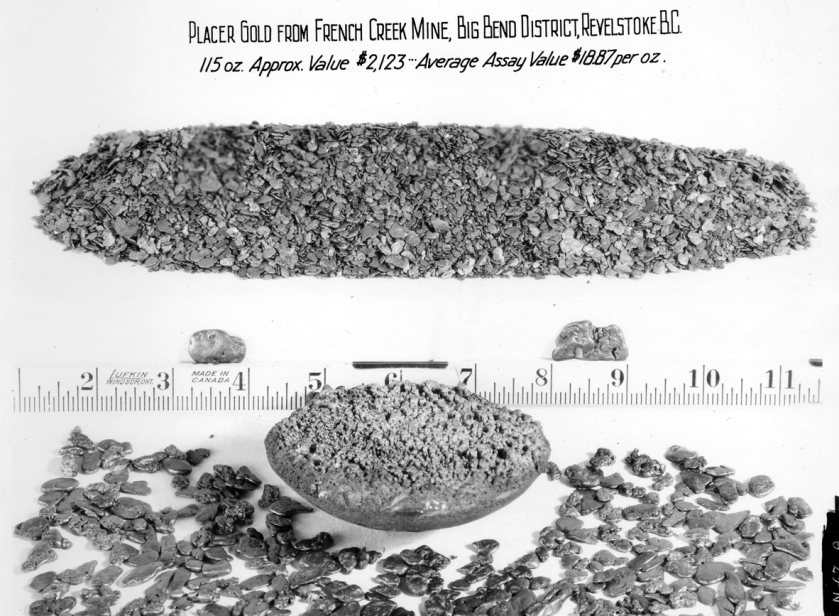 The largest nugget in this area was 14 ounces.