As we are approaching the end of the season, we decided to take a quick day trip to one of our Coquihalla claims. My wife and I packed the gear and were on the road by 6:00 a.m. from Vancouver. We planned on being on the river by 8, where we would meet up with my son Mike and another prospecting friend Cyle from Kelowna, who arrived the night before.

We arrived at the river right on schedule. I pulled up beside the other vehicles, but not seeing any signs of movement, I honked the horn thinking perhaps they were still sleeping. Still with no signs of life, we got out of our vehicle and looked inside their trucks only to find them empty. I strolled down to the river, and found several large holes they had potted the night before. Eager to get on the gold, I walked back to the camp and grabbed my gear. I no sooner put my back-pack on, when the two of them came down the trail. They had gone to the other end of the claim to do a couple of test pans.

Eager to get going, we all headed down to the river. I totally forgot that at this time of year we would not see the sun until about 4 o’clock in the afternoon. It was definitely cold. Mike and Cyle started opening up there holes, while I proceeded to dig mine. I classified my first 5 gallon bucket to 1/2 inch and took it to the river. My first bucket yielded 2 small flakes. I was not impressed.

There was a very large boulder about 3 feet behind where Mike was digging, so I figured I would do a small test bucket. There was a lot of sand, however, digging down about 6 inches, there were a lot of black heavies within the sand. I dug 1/3 of a bucket and took it to the river to pan out. Once again, my first pan yielded nothing. A little disgruntled, I figured I would dump the rest of the bucket into my pan and quickly pan it down. Half way through the pan, I saw a flash of gold, and thinking it was a very large flake, I yelled out to Mike and Cyle, to come take a look. As I panned it down to the last few teaspoons, it became evident it was a small nugget.

It’s not often you find nuggets on the Coquihalla, but they are there. Generally, when you find one, they are fairly coarse, indicating they have not travelled far. This one was polished and slightly worn, indicating further travel. It weighed out at 1.465 grams.

We were all excited over the find, and spent the rest of the day looking for more. I think it must have impressed Cyle the most, as he dug 60 buckets. That’s an incredible yard and a half of material. I couldn’t do that in two or three days. The guy’s a beast! On top of that, he was wet classifying down to 1/4″ with a bucket classifier. If you have never used one, it’s the cat’s meow. You can classify a five gallon bucket in 5 to 10 minutes. Way faster than a traditional classifier.

Mike ran twenty buckets of material using the Fossicker Pyramid pan. Depending on the material you are running, I would put this pan up against a high-banker for material speed. We all love this pan. 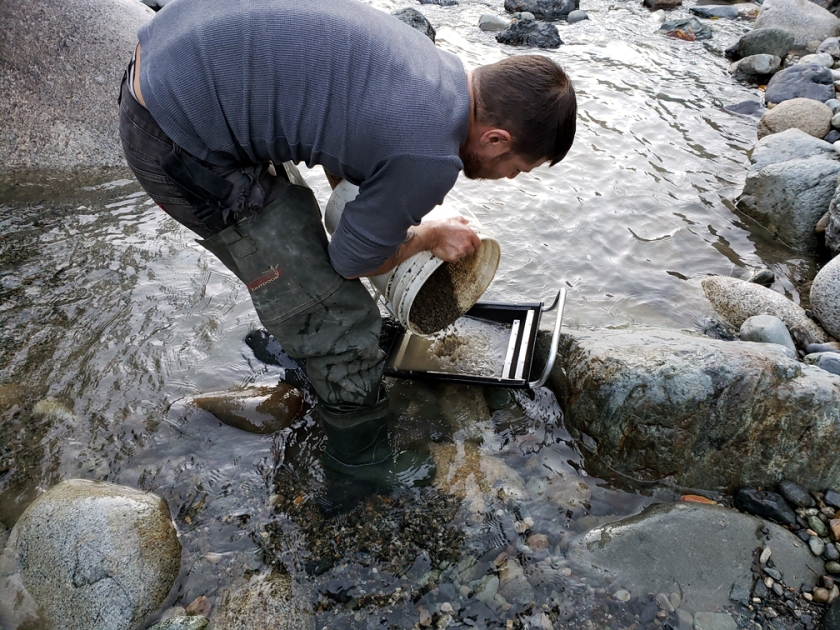 All in all, we all got a decent amount of gold. Tired and hungry, we all left somewhat happy with the days result. Of coarse, we all wish there was more, but that’s a prospector’s dream. There’s never enough.

Here’s a shot of one of my pans, and of coarse, I had to throw in my nugget for good measure!