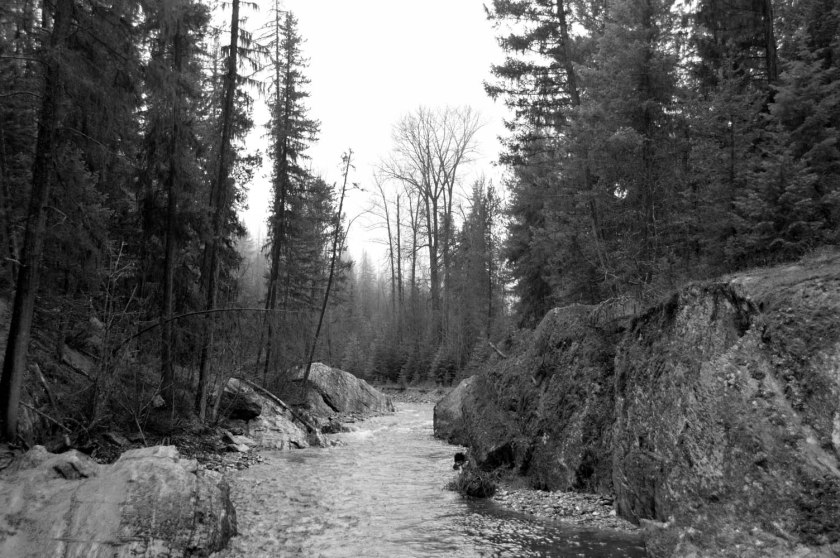 The first recorded mining activities along Perry Creek date back to the mid 1850’s. During this time period extensive placer mining took place above Old Town. The main area of interest reportedly was located between Old Town and Perry Creek Falls and two miles above the falls. The search for gold bearing quartz veins followed shortly.

Perry Creek, a tributary of St. Mary River, is about 23 km long. From its head waters to about 12.5 km from its mouth it occupies a distinctly trough shaped valley. The valley slopes are steep to about 300 meters above the floor.

Glacial till, as thick accumulations masking bed rock and consisting of silt, clay sand and boulders forming remnant shelves, is confined to the steep, lower portion of the slopes. Where tributary streams cut through the accumulation of glacial debris, steep banks or cliffs are evident.

At 12.5 km from its mouth to its junction with the St. Mary River, Perry Creek cuts through the foot hills of the Purcell Range. Here the valley widens and is essentially filled with glacial debris which extend upwards to nearly the top of the low rounded hills.
Approximately 3.5 km above Old Town, about where Perry Creek enters the foot hills, the creek forms a steep narrow gorge, commencing from a 30 meter high waterfall. The creek flows on well exposed bed rock.

Below the waterfall an old creek channel filled with up to 100 meter glacial till is evident, suggesting re-routing of Perry Creek from its old course.

Numerous shafts were sunk and pay streaks were not only worked by surface sluicing, but also by driving tunnels along pay streaks following a false bed rock.

No production record is available from this period. During 1903 new interest in the gold potential of Perry Creek resulted in the establishment of a steam shovel about 4.5 miles above the falls. About 1,000 yards of gravel were worked returning $260.00 in gold (1903 gold prices).

After the initiation of placer mining in the Perry Creek District the search for the source of gold begun. By 1898 numerous claims had been located along the slopes of Perry Cree: and the most prominent quartz ledges in the area have been investigated. The results obtained were erratic and for the most part disappointing.

The best values reported appear to come from the narrower quartz stringers within the shear zones. Samples taken from the large quartz ledge have been found to be disappointing. 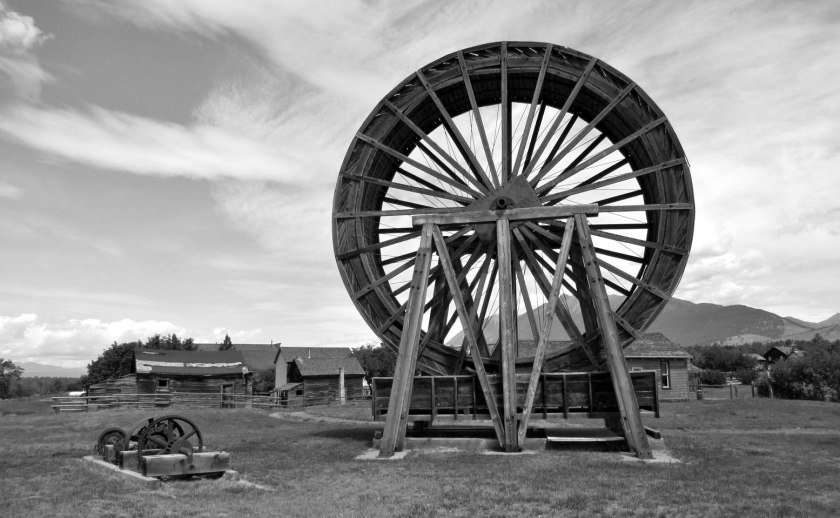 The above water wheel is located in Fort Steele. It is a restoration of the original wheel built by Perry Creek Gold Mines Ltd. The wheel is 32 feet in diameter and 7 feet wide. There are 72 buckets, each holding 70 gallons of water. The axle shaft is 6 inches thick and 14 feet long. The wheel revolves at 6.9 R.P.M. producing 68 horsepower driving an electric turbine which powered 2 water pumps that could raise 600 gallons a minute from the mine shaft.

Several other mining ventures have done extensive work and testing on Perry Creek but sporadic high gold values in soils were considered inconclusive. It is recorded that a total of 103,823 grams of gold was recovered from Perry Creek, mostly from 1874 to 1895.