The Fraser River is the longest river in British Columbia, flowing 1,375 kilometres (854 miles). The river’s annual discharge at it’s mouth is 3,550 cubic metres per second and it discharges 20 million tons of sediment into the Pacific Ocean.

Although gold had first been found on a tributary of the Fraser River in 1857, it was the discovery of large amounts of gold on the bars of the lower river in 1858 that started the gold-rush to the country. Prospectors kept pressing onward and placer diggings were made along the entire length of the river and its tributaries.

Gold was found at the surface and to a depth of only a foot or more on bars, some exposed only at extreme low water, and on benches along the lower river. The lowest bar on the Fraser which was found to yield a remunerative return, was Maria Bar,  about 28 miles below Hope, and nearly opposite the mouth of the Chilliwack River. All the gold found was flour gold.

From Hope to Yale, however, it was observed that the bars became richer and the gold  was not so fine. It is highly probable that all the gold was transported by the river itself and not of local origin. Hills Bar, just below Yale, probably yielded more gold than any other single locality on the Fraser, with estimates running at 118 million dollars at today’s prices.

From a point on the river a few miles below Boston Bar (about 16 miles above Yale) to Sisco Flat, a  short way below Lytton, a distance in all of about 28 miles, rich deposits of  “heavy” gold were worked. Farther up the river from a point about half-way between Lytton and Foster’s Bar (just below Lillooet) to a distance above Fountain, coarse gold was obtained. Large nuggets were occasionally uncovered, and nuggets up to 6 ounces were recovered near Lillooet.

The total yield of placer gold from the Fraser River is unknown, but it is estimated to be hundreds of millions of dollars at today’s prices. Much of the placer was found and worked in the first few years after the initial discovery. By 1875 most of the miners  were Chinese and Indians. In 1890, 400 Chinese miners were still working along the river. At that time it was reported that nine-tenths of the gold was being recovered by Chinese miners.

Alexandra Bridge Over The Fraser River At Spuzzum (1944) 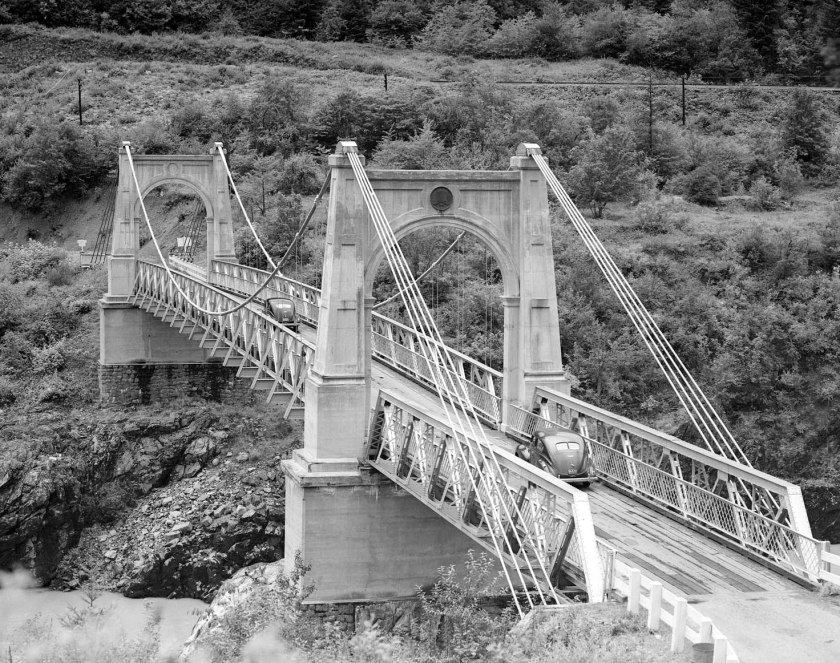 It was considered that the coarse gold found around the Lillooet area was of local origin and was eroded from the belts of argillite and micaceous schists that cross the river. It is also interesting to speculate on the possible effect that the great Fraser River fault zone may have had upon the localization of the original lode-gold sources of the placers. The fine gold on the other hand was partly concentrated from the glacial gravels and might have travelled considerable distances from its bedrock origin.

The existence of gold for several hundred miles along the Fraser River and the development of travel along its course, led to placer discoveries on tributary streams. Placer was found and worked on the Coquihalla, Thompson, and Lillooet Rivers, Siwash and Cayoosh Creeks, and the Bridge River and its tributaries.

The early bar deposits were shallow and were worked with pans and rockers. Some of  the benches were hydraulicked and several dredges were built to work the bars at Lillooet and Lytton. Even now some bars are still worked every year by snipers at extreme low water. A lot of gold is still being recovered from the Fraser each year. The Fraser River continues to be an intriguing gold river for modern day prospectors.