One of the first devices used after the gold pan was the gold rocker box. A rocker, also called a “cradle” or a “dolly”, is used when water is in short supply or when the depth of the stream or creek is too shallow to use a sluice-box. 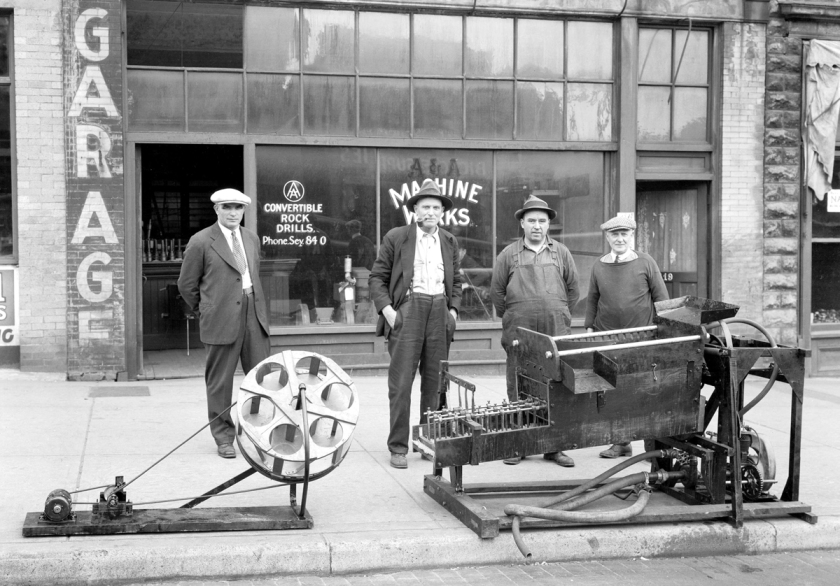 A And A Machine Works Gold Rocker For The Cariboo (1932).

The principle of the rocker is simple: As the cradle is rocked, water washes the finer material through the bottom of the hopper and gold collects on ridges or riffles. Rockers were used extensively for placer mining. With one man to load soil and water and a second to rock it, the rocker could process about 200 buckets per day.

A rocker is used in small-scale placer mining applications for both sampling and washing sluice concentrates and material cleaned by hand in other placer operations. Rockers consist of three components: a sluice, a screen, and an apron, and usually come equipped with handles. The handles enable the devices to be rocked sideways back and forth in order to separate heavier particles from finer particles hence the term “rocker.”  On average, a two-person placer mining operation using a rocker can process up to one cubic yard (0.76 m3) of dirt per hour. The operational capacity of a rocker can be increased with the addition of a power drive.

Rockers were introduced in 1848 by Georgian Isaac Humphrey and quickly replaced panning as the preferred method for sampling gold in placer deposits.

Rockers are still used today and operate on a basic principle similar to sluicing. They are commonly handmade from various materials and come in a variety of sizes and designs. The process of using a rocker has remained unchanged since first introduced. Gravel is dampened before being shoveled into the rocker box. Water is constantly poured over the gravel for a flushing effect. This may involve the use of a long-handled dipper or the capture of water from a small stream by pipe or hose. Once in the box, the gravel is cleaned and the oversized materials inspected for nuggets before being discarded. The riffles in the lower part of the device or hopper capture the heavier materials including dense gold.

In a standard mining operation, rockers must be cleaned every two to three hours. Cleaning may be more frequent if a richer material such as clay is processed and when gold begins to surface on the apron.

The apron part of the rocker is then dumped into a pan. Material trapped in the riffles of the sluice gets taken up with a flat scoop situated at the head of the sluice and then washed with clear water. The remainder is scraped off the boards and put into a pan with the apron concentrate, which is cleaned in the pan. Sometimes clay in the payload gets processed in the rocker. If gravel is too thick and sticky because of clay, it sometimes has to be soaked in a tub before rocking.

As with panning and sluicing, water supply is critical to a rocker operation. If there is not a plentiful water supply, a small reservoir may be constructed in the front of the rocker to serve as a settling basin, and another, at the rear, used to drain any overflow. The water is usually reused.