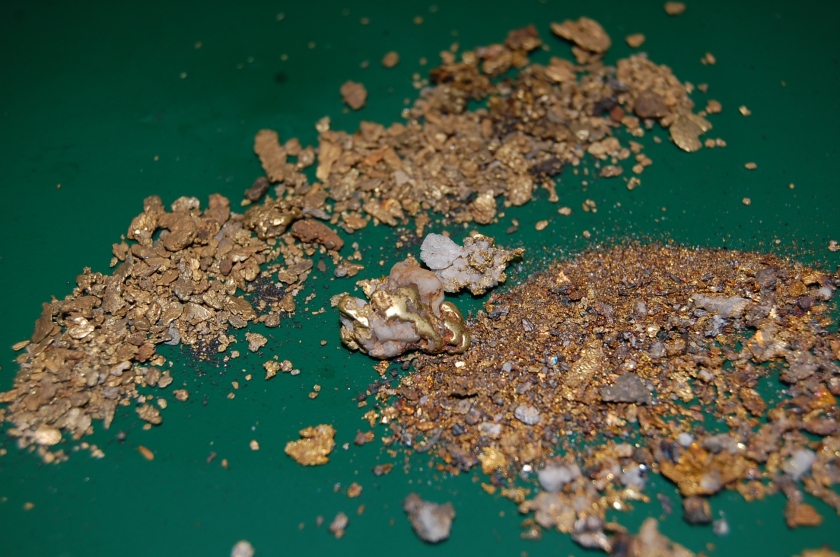 Our next series of posts will focus on the vast wealth of Vancouver Island. Vancouver Island hosts an astounding variety of rich mineral deposits. Nearly every kind of metal deposit occurs here, from the phenomenally rich gold veins of Zeballos, to the huge massive sulphide deposits at Boliden’s Myra Falls mine. As most of the area is well-serviced by logging roads, you can check out the many interesting localities with just a two-wheel drive vehicle. However, good tires and a real spare are a must due to sharp rocks turned up during frequent road grading, and logging trucks abound, so be aware always and drive with your lights on!

Vancouver Island could very well be described as “Treasure Island”.

Vancouver Island is built on a thick platform of Paleozoic volcanic-sedimentary rocks known as the Sicker Group. These rocks host all of the known rhodonite deposits, and the large polymetallic volcanogenic deposits mined at Myra Falls near Buttle Lake and several other former mines.

Overlying the Sicker Group is the Upper Triassic Karmutsen Formation, a thick (up to 5 km) package of oceanic basaltic rocks. Towards the top of this section of dark green lava flows and basalt, sedimentation begins in the form of limestone beds in small basins, and the upper parts of the individual flows are often amygdaloidal or feldspar porphyritic. In the amygdaloidal sections, small gas holes and fissures in the lavas have commonly been filled with quartz, epidote, prehnite, pumpellyite, native copper, chalcopyrite, chalcocite, bornite, vanadium minerals, hematite, magnetite, pyrite, and even high-grade gold values. This mineralization occurs syngenetically with the lavas and sediments, and if it is metamorphosed into younger hydrothermal systems, it can contribute to forming ore bodies or gold veins in the Quatsino Limestone.

The Upper Triassic Quatsino Limestone overlies the Karmutsen almost everywhere on the Island, and can vary from several inches to more than a kilometre thick. Composed almost entirely of grey limestone, it is often bleached white and changed to marble near granitic intrusions. Towards the top of the section it becomes darker as more sand, silt, and new volcanic debris fall into the shallow basins. Fossils are very common in this upper section, with large coral reefs, shellfish, ammonites and other near-shore life present themselves. The Quatsino is responsible for most of the skarn-type ore deposits on Vancouver Island, which lends itself to forms of magnetite, copper, and often gold and silver values. Many world-class cave systems are found within the Quatsino Limestone, such as those found at Horne Lake near Qualicum.

Above the Quatsino is the Lower Jurassic Bonanza Volcanics, a little lighter green in colour and with more explosive breccia rocks and volcanic sediments in the section, which can exceed 1 km in total thickness. Parts of the Bonanza erupted underwater, and part as airfall pyroclastics. Iron in the form of disseminated hematite, pyrite, magnetite and jasper, often with some copper minerals may be found, as at the huge Island Copper Mine near Port Hardy. The hot, fluid, mobile masses were very important in the formation of many large mineral deposits on the island. A unique feature of these rocks is the association of blue dumortierite and rarely black or green tourmaline with the porphyry copper systems.

The last significant rock-type of note, is a series of small granitic intrusives of Tertiary age, about 25 million years old. These Intrusive bodies, called the Catface Intrusions, were very important in the formation of rich gold-quartz vein deposits. They have a very different metal signature than any of the previously described mineralization, with arsenic minerals often forming part of the vein systems. Some of the better known Tertiary gold deposits are found on Mt. Washington, and at Zeballos. Zeballos gold veins are often amazingly rich and narrow, and have been described at the famous Privateer Mine as being “erratic in grade, between 200 and 300 ounces of gold per ton”. Some of the minerals found in various Tertiary deposits include native gold, tellurides, pyrite, arsenopyrite, chalcopyrite, sphalerite, galena, real- gar, cobaltite, and rarely cinnabar and native arsenic.

That’s it for the geology of Vancouver Island. Please bear in mind that mineral collecting in open pit or underground mines can be very dangerous! Try to collect your specimens from the waste dumps well away from the mine workings.  Wear rubber gloves when collecting lead, arsenic or mercury minerals.

In the next post, we will take a look at some of the areas of interest for mineral collecting and then on to my favorite topic, placer gold!